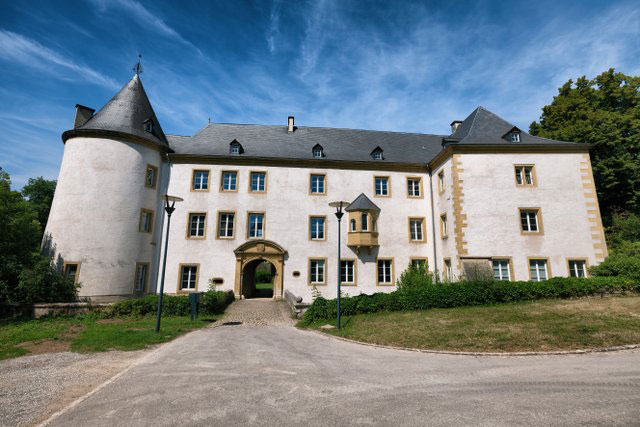 Winter atmosphere at the castle of Sanem

The imposing centuries-old castle of Sanem is, with its park as a backdrop, the ideal place for long family outings, both in summer and in winter. We discovered this building during one of our winter walks in the region. This is a report of our excursion.

We are passionate about winter hiking and have been discovering beautiful landscapes for years. We are not the type of people who enjoy queueing in places crowded by tourists. We have the sights and museums to ourselves and can discover these places in peace. We have also learnt that the locals are more patient and generous if the places are not busy.

In addition to that, we love to warm up after a long walk in winter with a delicious cup of tea or mulled wine. We often discover activities that we would not have experienced at any other time of year, as we did last year in Sanem during the “Wanterfeeling” in the castle gardens.

Annual “Wanterfeeling” in the castle gardens

During our walk in the southwest of Luxembourg, we arrived in the small village of Sanem at the end of the afternoon. Our destination was the “Kannerschlass”. We really wanted to see the building that we had heard so much about. To our surprise, we discovered the castle gardens and its scents, sounds and activities when we arrived. We were right in the middle of the “Wanterfeeling” market, which is held every year in November since 2007.

This market must be well known as this magical atmosphere in the castle park attracted many people. This is not surprising, since this winter market is the perfect opportunity to find Christmas gift ideas and to get in the holiday mood.

There were no less than 40 booths in the park, offering decorative items, jewelry, clothing, flowers, but also seasonal culinary specialties. The children had their faces painted and the adults gathered to chat together over a hot drink and enjoyed the good vibes. There really was something for everyone. There were unknown performers and in addition concerts by various music groups, such as the “Fred Baretto Group”, “Heavy Petrol”, “Kantri Klapp” and “Jazz Lives”.

We spontaneously changed our plans. Instead of going back home, we stayed there until late in the evening. We tasted delicious dishes and bought some souvenirs at the various booths. The castle building itself provides an ideal and enchanting backdrop for the visitors of this magical event. One of these visitors introduced us to the history of this castle.

The building we were looking at while he filled us in on the history was illuminated that evening in a magical blue. Inside, however, it had remained completely dark. We learned that its interior cannot be visited, but only admired from outside. The castle as it is visible today is not the original building. The latter unfortunately was destroyed and rebuilt many times during its history.

Until the 13th century, this area was used as a farm. The brothers Wilhelm and Johann are the first builders to have erected a castle on the Roman ruins of this place, around 1270. In the beginning, it consisted of only one square tower. The castle was then gradually constructed around this tower.

It served as a fortress for the protection of the county of Luxembourg. The deep moat of the castle is still visible today. Throughout its history, the building has been the residence of several aristocratic families of the region and has been exposed to phases of destruction, reconstruction and expansion. Although the castle has undergone many changes, it still retains much of its original character.

In 1753, the castle was finally acquired by the Tornaco family, who owned it until 1950. The family, marked by a spirit of independence and a European philosophy, then sold it to the town of Esch-sur-Alzette, who repurposed it as an orphanage for the “Fondation Kannerschlass”. In 1965, a pavilion was added to the park, next to the castle, where the director of this residence was housed. In 1971, the building was declared a historic monument and the Luxembourg State bought the entire site shortly afterwards. It still remains state property today.

It is fantastic to see the old and the new elements come together in such a remarkable way. We are happy to have discovered it during this exceptional afternoon and evening that we spent at the castle of Sanem.

“Ciné Kursaal” – The oldest cinema in the country