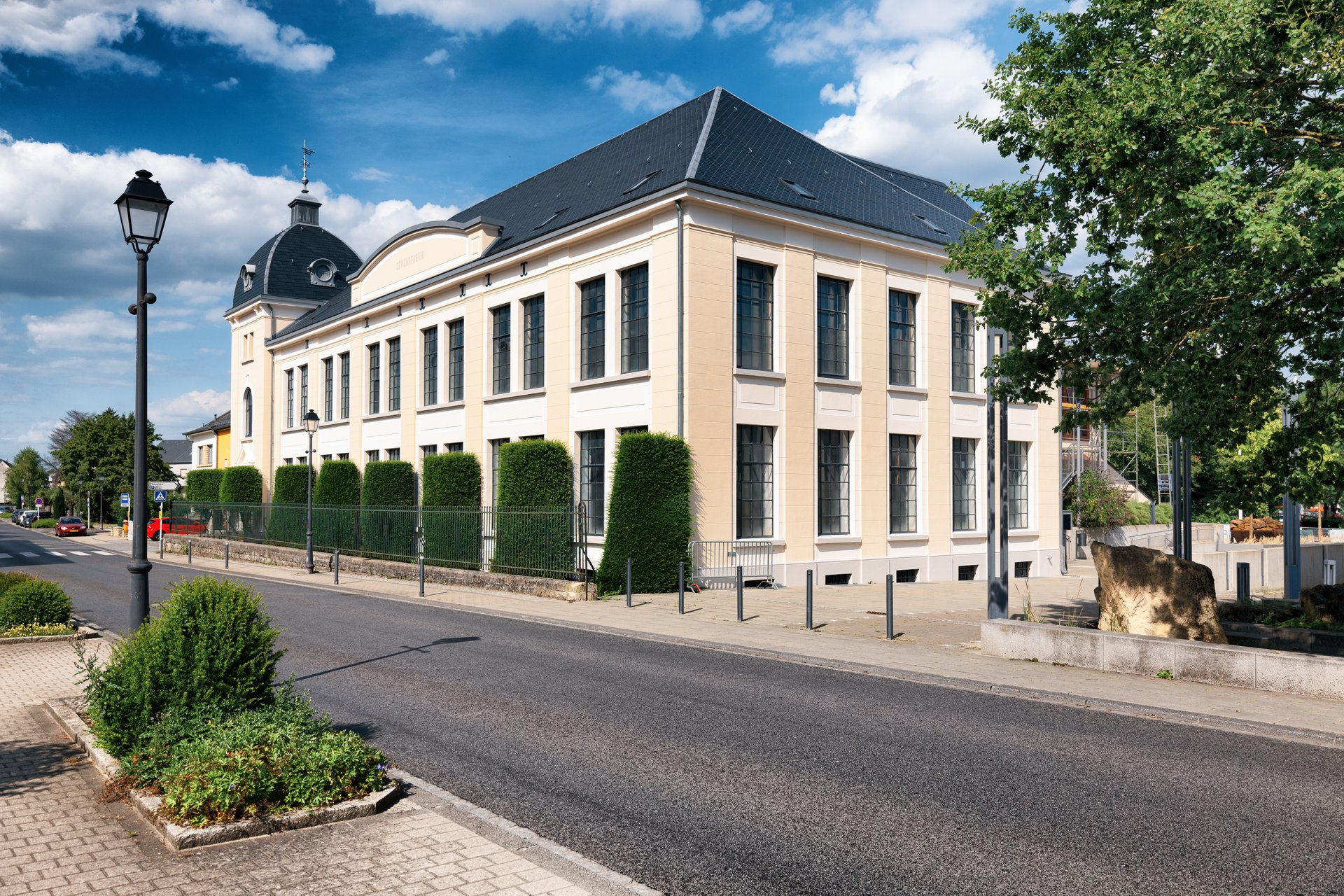 The “Schungfabrik” in Kayl – an event location with soul

The “Schungfabrik” is the cultural center in the town of Kayl and is located, as its name suggests, in a former shoe factory. The center offers a wide range of shows and events. We took the opportunity of attending one of the concerts to learn a little more about this place.

We didn’t have high expectations for the event location: It’s simply an old shoe factory. Once there, however, we were pleasantly surprised. Sometimes there are places on this earth that turn out to be real little treasures and the “Schungfabrik” is definitely one of them.

The event location – The “Schungfabrik”

When we went to the concert, we imagined the building to be quite different from what it really is: We were prepared for a modern and futuristic building or a new building without soul. At first glance, the building itself is quite inconspicuous, but the blue light that illuminated it that evening made it look noble. It did not remind us of an old factory at all, but rather of a church, because of its tower in the front.

Inside, we quickly realized that what makes this cultural center so special are its various rooms that allow multiple events to take place simultaneously. While we were listening to the sounds of Bryant’s guitar, a classical chamber concert and a parody show with the “Fadas family” were on at the same time in the other rooms of the center.

After our concert, we walked around these different adjoining rooms. Some were already prepared for the next concerts with stage and light installations ready to go. Others, probably old workshops, were completely empty. We could imagine plenty of other cultural events happening here. We learned later that various interesting exhibitions as well as panel discussions also take place in these rooms.

This building did not start out as a cultural event location but was once a quite ordinary shoe factory. The founder, Mathias Hubert, did not start his trade here at 14 “Rue Pierre Schiltz”, but started in a small shoemaker’s shop in the village on rue de Rumelange. There he made work boots and gaiters and was quite successful early on. It was only natural that he decided to expand his business in 1912.

His business flourished with the economic recovery of the mining region, so that five years later he was able to increase his workforce from 25 to 70 employees. His safety shoes contributed enormously to work safety in this region and at this time. Ore mining was not a safe activity as it relied on explosion, either above or underground.

In 1964, the company was taken over by H. Jordan, but as the days of mining slowly ended, the demand for work boots declined and the new owner unfortunately had to file for bankruptcy two years later. As the building had a large storage capacity, it was used to store office supplies for some time after.

Eventually the city took over the building in 1980. It then took another ten years to turn it into the cultural center that it is today. The “Schungfabrik” has hosted wonderful concerts, fascinating readings and many interesting exhibitions since 1990.

On the evening of our concert, it was great to observe how the different audiences mingled and socialized before, during and after the events. During the interval, the spectators of the classical orchestra concert sipped their glass of sparkling wine as they mingled with the beer-drinking visitors of the blues concert.

We also learned that the new façade of the building, which was recently restored, was very popular among the locals. During the restoration, the ornaments and the borders of the windows were made highly visible. The new facade gives the “Schungfabrik” a new formidable shine.

When we go out, it is important to us that the building we are visiting tells its own story. That is why we are always keen to attend an event at Kayl’s “Schungfabrik”.

A rainbow region in the south of Luxembourg