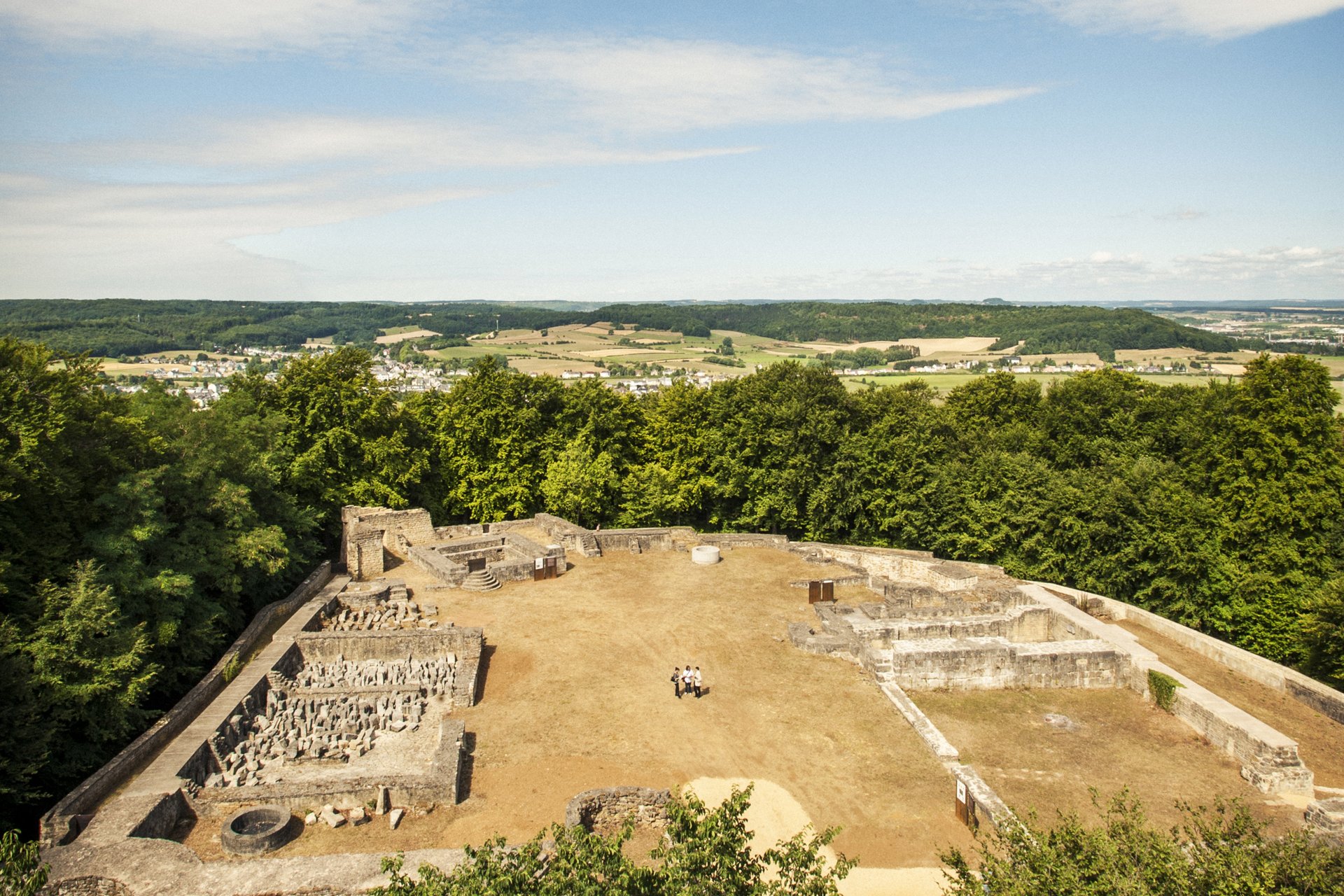 Dudelange – The mirror in the black frame

Gehaansbierg? Now, there is something to make your mouth water! In Luxemburgish, “Gehaans” suggests “hanging” or “suspended”, or something like the Gaalgebierg (“Mount of the Gallows”) in Esch, where in the seventeenth century, people were diligently flogged, beheaded and hanged… ”No, no, no” say some of the country’s Minettsdäpp, as if to disappoint the visitor unfamiliar with either the location or the gallows, “it really has nothing to do with any sort of execution. Gehaans comes from Johannes and therefore from St John, this is about the Saint John Mountain (or Johannisberg), the Gehaansberg’s official name”. But the locals will bring you some consolation, “Cheer up, you know, up there is haunted”. Ah, so that’s it! Nothing more to stop us now from going there!

Divine help during the climb

In the rue du Mont Saint Jean, an encouraging sign post informs you that the top of the mountain and the hidden castle’s ruins are a ten minutes walk away (and walking is the only way of getting there). That may be true, but this is not a walk for the lazy. The path takes the rambler right through the forest via a steep route. Should you run out of breath, there is divine help at hand in the form of a stone station of the cross that points you in the right direction. Once you have reached the top, you won’t see the castle’s ruins straightaway. Instead, the breathless climber will see a rather lopsided chapel. Unfortunately, its door is locked, the earthly tenant having left. Don’t be surprised, the last time a hermit was seen reading mass here was in 1794. Past the watch tower and its breath taking view of the south of the country, a glade opens up and reveals the enchanted ruin. The watch tower is open between 1 May till 30 Sept from 7 am till 7 pm Mon-Fri and 10 am till 7 pm on Sat and Sun; and between 1 Oct till 30 Apr, by appointment only, call 516 121 213.

On some of the barriers, erected in honour to the iron and steel making traditions in the South and turned chic by the passage of time, you’ll find panels carrying information on these age-less remnants. They guide you through the site and tell you about the past. One can assume it all started with the Romans. The 4th century crumbled ruins served as foundation to two defence towers built in the 13th century, before the lords of Dudelange decided to leave the less-than-secure city and took up residence higher up and extend the fortress there. When you walk around the castle’s ruins today, you may just be able to conjure up the “very famous fort” that was built here, as historical documents would suggest. According to one of those documents, sometime in the 1420s, a punitive expedition set out from the city of Luxemburg to attack a “a powerful stronghold”. In vain. In the middle of the 15th century, the French attacked the Chateau Fort several times. In 1552, the then governor of Luxemburg, Peter Ernst von Mansfeld, set it on fire by way of a final touch. Thereafter, there was no point in rebuilding it. (Mind you, it serves old Mansfeld right that little is left of his own castle at Clausen!).

The giants’ playground
But is this castle really haunted? Well, the bricks are strewn all over the place and make it look as if a giant played with his Lego blocks until he lost interest. But there is no visibe sign of the untidy giant. But,hang on,what is this? Suddenly, amidst the building bocks, the lonely visitor perceives a mirror in a black frame. How did it get here? And more importantly, who uses it? Would it be Lady Giant’s hand mirror? Or did it belong to an altogether different lady? Legend has it that the “Jongfra of Gehaansbierg” (the Virgin of Gehaansbierg) used to live here. She was a noble lady who was already a bit savage when she was still alive and who, after an unhappy marriage, is reputed to have led a retired life behind the castle’s walls. The locals kept the legend alive as her charity was much missed after her official death and claimed that she did not die but was sentenced to haunt the place.

…or a snakes’ pit?
The followers of the conspiracy theory are divided on the rest of the story. Essentially, they only agree that the Lady appears every seven years in the night of May 1, to bathe in her white gown and to comb her hair – would that be when she uses the mirror? If a young man were to turn up at that moment, she would beg him to deliver her. But boys, be careful, there is a snag: the following night, the supposedly innocent young lady will appear in the shape of  fire-spitting snake holding a key between its jaws. The young man must get hold of the key and only if he succeeds, will the spell be broken and will he receive the ghost’s hand in marriage as well as her supposed fortune. But who would want to marry a woman who hasn’t washed for seven years? We don’t know whether Willem Dafoe and John Malkovich, who appeared here in 2000 during the filming of the “Shadow of the Vampire” met the presumably malodorous ghost. However, Dafoe himself looks so terrifying in the film that the Gehaansbierg Ghost may will have fled….

The planets trail in Schifflange: head in the stars, feet on the ground!