To animate a dormant territory during the summer, in connection with the theme of migrations of yesterday and today. To encourage a mix of arts and cultures, in the image of the territory, by involving the various stakeholders in the project: the population, cultural associations, local authorities. The Estivales de l'Alzette are four days of festivities based on the cultural and associative wealth of the region: music, dance, cinema, theatre, gastronomy. An alchemy that will make the Piscine de Micheville a place for meetings and exchanges between spectators.

Text provided by the project partner 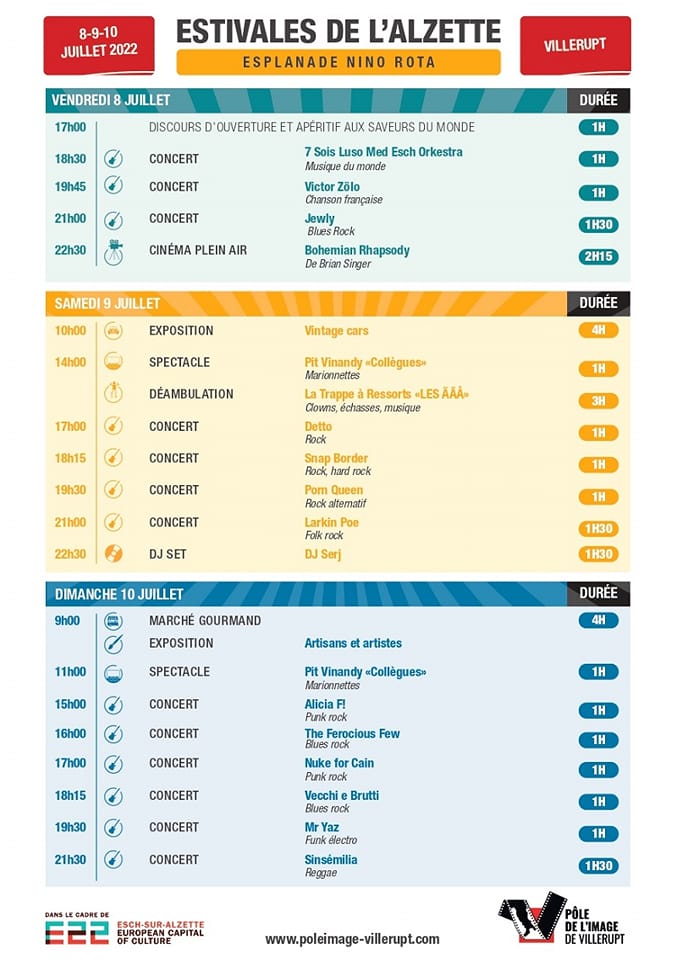 The purpose of the association is to develop audiovisual culture around three major axes: distribution, creation and training. Within this framework, the association is called to take over the management of the cinema Le Rio, as well as the organisation of the Italian Film Festival in Villerupt and to make use of all the means contributing to the achievement of its objectives. In addition, the Pôle de l'Image has developed a 'Memories and Images' section over the last 20 years, with the publication, to date, of 12 historical works on the heritage of Villerupt and the region.

Once upon a time, there was the Festival... In 1976, the Villerupt Italian Film Festival was born somewhat by chance. A small group of film buffs from the MJC organised themed film weekends (westerns, science fiction, etc.) and this time, taking advantage of the wave of success of Italian cinema in France, from 9th to 14th of November 1976, they decided to present around twenty Italian films. Because of the unusual number of spectators (more than 3,500), the organisers repeated the event the following year with even greater success, reaching more than 30,000 spectators in 1983. The organisers were all volunteers, of course, and the group quickly grew from ten to around a hundred people during the festival. The number of films increased to thirty and the festival was extended to two weeks. The programme included all the acts widely imported into France, social films, the 'Masters' (Petri, Rosi, Visconti, etc.) and an opening to new authors. At the beginning, the audience was local and composed of many Italians or children of Italians. Later, it spread to the whole of the Greater SarLorLux Region, with an ever-increasing number of film lovers coming to see films that had often never been seen in France. In 1983, suffering from the crisis of the Italian cinema, as well as that of the industrial activity of the region, the festival stopped, to resume only in 1986, with the momentum of some organisers. New proposals, new authors, new actors: the regulars was a little disconcerted. This new formula gradually took hold and in the early 1990s, films by Tornatore, Verdone, Salvatores, Moretti, Benigni... once again attracted more than 30,000 spectators at each edition. In 1998, the festival was professionalised and restructured by separating from the MJC. The cultural scheme was redefined (the current form of the event) and the number of films increased to over sixty. The selection of films aims above all to reflect as much as possible the actuality of quality Italian cinema without any self-censorship, but also (and above all) to respond to all those who dictate the decline or revival of Italian cinema through the sections of the Cannes Festival.

The support of the public (more than 46,000 spectators in 2010, and 40,000 in 2016), which is younger, more international and of a more developed cultural knowledge, validates this new strategy, which is supported, moreover, by the French, Luxembourg and Italian institutions.

The success of the event and its originality (Villerupt has none of the characteristics of a festival town) have aroused the interest of many students and researchers, who wanted to define its identity, between emigration, the working class world and multiculturalism, but the organisers do not intend to let themselves be pigeonholed into these categories. Of course, the festival is at the centre of a very strong 'Italianness' zone (subtitles are nevertheless essential for most spectators) and still contributes to enhancing the image of Italy and its cultural production. However, the organisers want, above all, to take part in a broadening of the cinematographic offer for a large and varied public, and to give this public the opportunity to take part in an event which combines popular and elite culture, to encounter directly the works and those who produce them.