If you are looking for a very special souvenir of the European Capital of Culture, you should keep reading. Esch2022 has recently launched a series of brand new products designed in collaboration with the national brand initiative Luxembourg Let’s make it happen.

All of these products are “made in Luxembourg” and reflect the history of the Minett. They are designed to represent the diversity and creativity of the country of Luxembourg – in the case of Esch2022, the south of Luxembourg – in a sustainable way.

The Luxembourg object designer Olaf Recht, for example, was inspired to give new life to the old parquet (floor) of the meeting room of the municipal council in Esch-Alzette. His intention was to give this long-lasting material, which has already survived a hundred years and whose traces reveal a myriad of stories, a new function that would once again catch people’s eyes. With this in mind, he created a clock bearing the meaningful slogan “Time leaves traces”. After all, time leaves just as many traces as the countless people who have walked across the antique parquet floor over the decades. 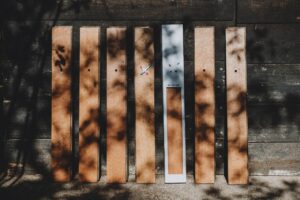 Raoul Gross, who grew up in Esch-Alzette, wondered how many stories people had shared with each other when opening a bottle in the meeting room – or afterwards, when they continued to debate over what they had discussed. His practical “Bottle Opener” is made of metal and the wood of the parquet floor. It comes in a box, which is made of a piece of raw wooden plank.

Both objects are handmade and limited to 200 pieces. Their engravings and packaging indicate that they were created in the framework of the European Capital of Culture Esch2022.

Moreover, mural artist Alain Welter has already left his mark in the southern region of the country, for example on the cooling towers of ArcelorMittal in Differdange, which is one of the Esch2022 municipalities. For the launch of Esch2022, he created typical Minett motifs to decorate ten buses of the TICE transport network with the help of the family-run company Lettrage Langehegermann. On the basis of this creative bus design, the artist was also commissioned by the European Capital of Culture to artistically apply typical graphic elements of the Minett region to a series of fine ceramics, that will definitely add a splash of colour to your daily coffee break.

All items are available online at luxembourgcollection.lu and at the Esch2022 Visitor Centre in Esch-Belval, as well as at the Infofabrik in Esch-sur-Alzette, the Annexe22 souvenir shop (Brillplatz), the Diderich bookshop and other points of sale outside the Esch2022 region, including the Luxembourg House.

And with our next souvenir, we would like to put your knowledge of the Minett region to the test. The board game “Kenns du de Minett?” wants to find out how much Luxembourgers actually know about the Minett and how well the true “Minettsdäpp” know the region in which they grew up. 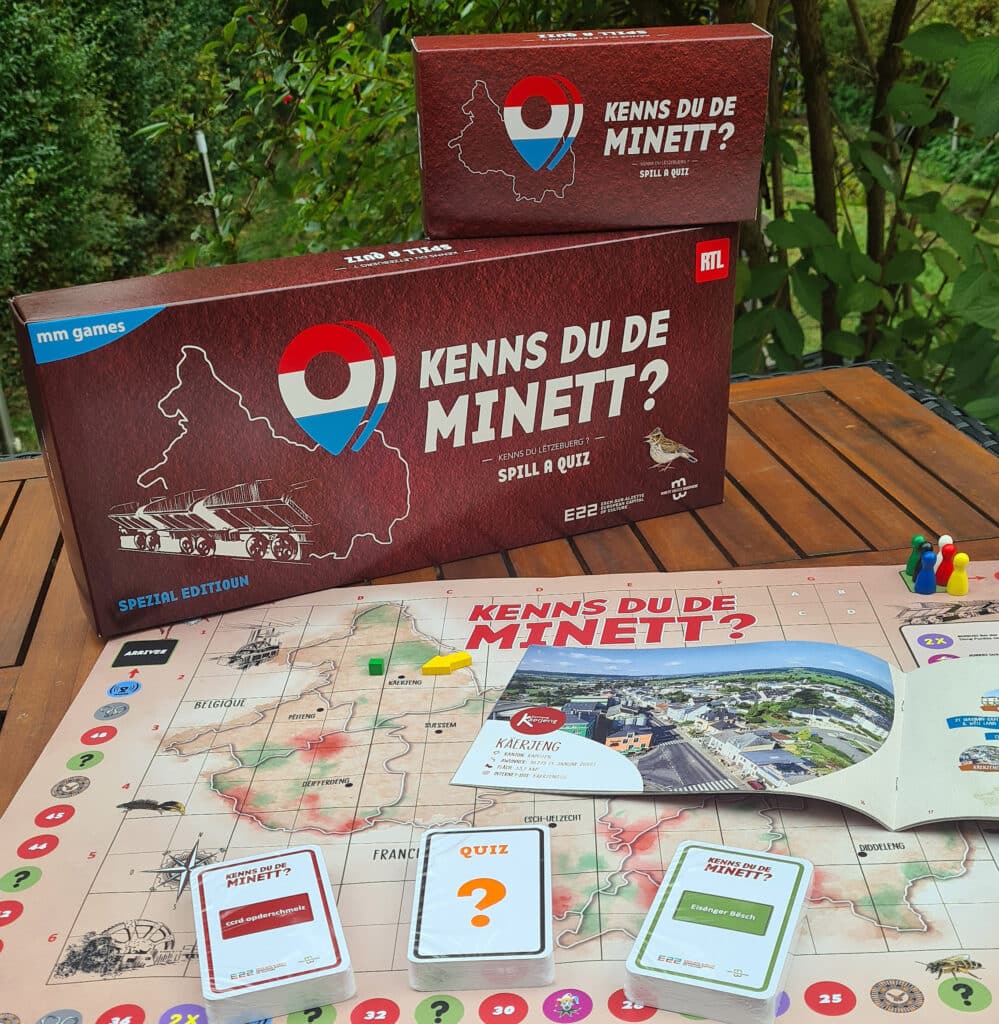 Everyone has spent some time in the Minett region, whether it is because they live or went to school there, have relatives in the area or for other reasons. The region has a lot to offer, with its 11 municipalities, over 150 nationalities, nature reserves and biotopes, cultural institutions, tourist facilities and much more. And above all, there are still some places and stories that even the inhabitants of Minett have never heard of.

Thanks to the cooperation with magicmultimedia, Esch2022 and the PRO-SUD syndicate now have the opportunity to make all these sites and stories accessible to the public in a playful way. The game “Kenns du de Minett ?” allows the player to actively discover the Minett and encourages them to visit the various sites and familiarise themselves with the history of the region.

The game contains 100 game cards with 3 main axes: The cities and districts, nature and culture. There are 50 quiz questions on the topics of the biosphere reserve, history, nature, sports, culture and interesting facts about the region.

An accompanying information brochure provides the player with more in-depth knowledge about the “Minett UNESCO Biosphere”, its municipalities and towns, the European Capital of Culture Esch2022 as well as the exciting cultural and tourist sites in the region.

The game is now available in Luxembourgish an makes a perfect gift for St. Nicholas’ Day or Christmas. You can get it now for €29.90.

You can buy the game “Kenns du de Minett?” at the Esch2022 reception centre (3, Avenue des Hauts-Fourneaux in Belval), at the Annexe22 (Place de la Résistance in Esch-Alzette), at the Diderich bookshop in Esch-Alzette, in all Cactus supermarkets, at Feidt in Pétange, at “Eis Epicerie” in Soleuvre, at Domino in Luxembourg-City, at Rischette in Junglinster, in Ernster bookshops and at the Foire-Fouille in Pommerloch.