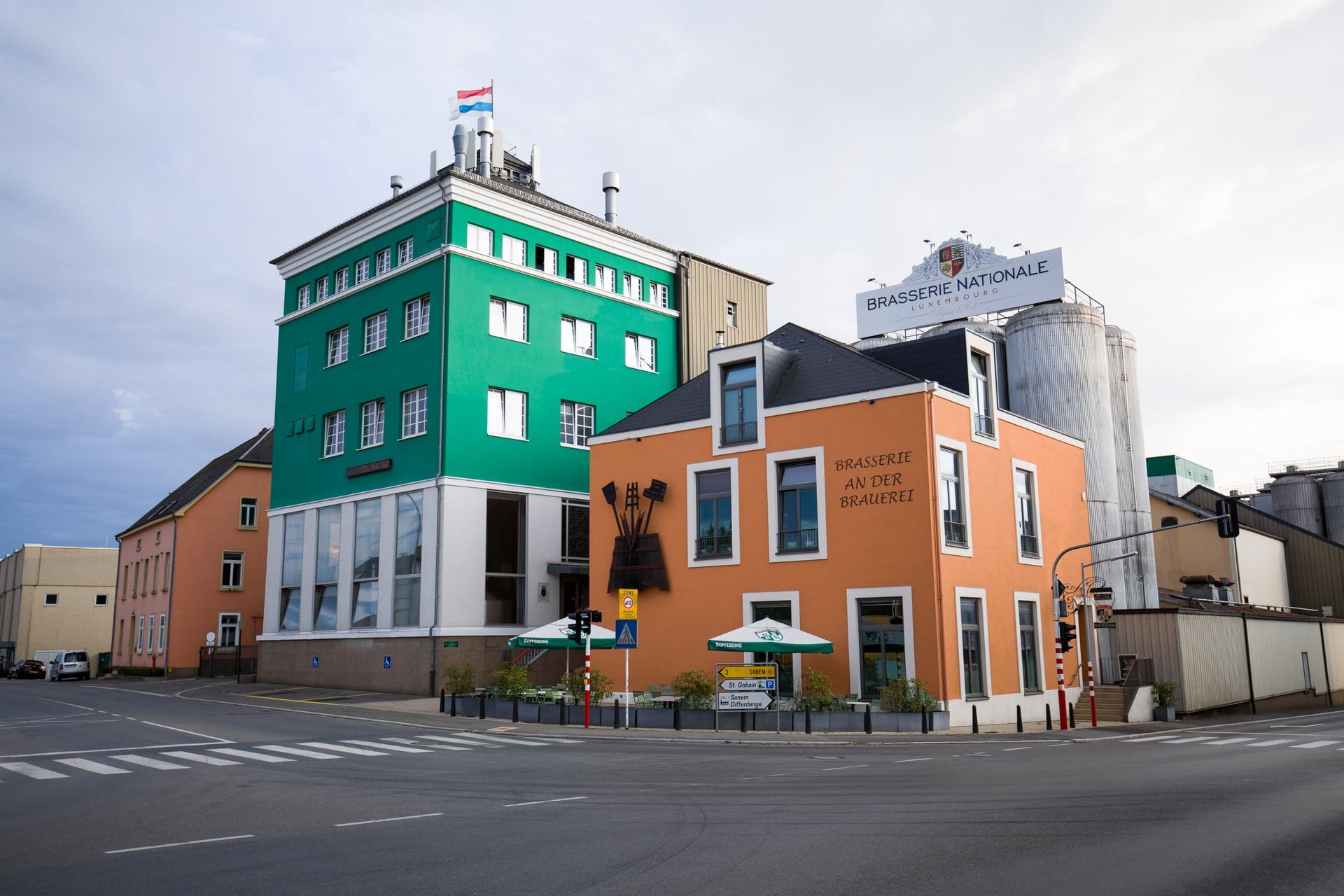 While the Miselerland region to the east is all about wine, the Minett region to the south is all about beer. There is a long tradition of brewing beer in Luxembourg. Beer was already being brewed in the monastery brewery at Münster Abbey near Clausen as far back as 1300. The monastic brewing tradition continued for many centuries but was usually only possible in spring and autumn because fermented brewing yeast didn’t work in the cold of winter and beer spoiled too quickly in the heat of summer. Progressive industrialisation wasn’t the only thing enabling year-round industrial beer production in the 19th century. The boom in the Luxembourg steel industry also brought increased beer consumption with it due to the growing army of workers flooding in. Founded in 1842, Bofferding Brewery was situated in the Minette Basin around Bascharage, benefiting greatly from this location.

There are around 100 types of beer in Luxembourg today, with an average beer consumption of 84 litres per person. To the credit of Luxembourg residents, the word is that most of it is consumed by the many tourists! Just shy of 290,000 hectolitres a year, local production is divided between the three major breweries Brasserie Nationale (Bofferding, Battin, Funk-Bricher), Brasserie de Luxembourg (Mousel, Diekrich), Brasserie Simon (Simon, Ourdaller, Okult) and numerous microbreweries. The clear market leader is Brasserie Nationale in Bascharage, a 10th-generation family concern. It was created by the merger of Brasserie Funk-Bricher (1764) and Brasserie Bofferding in 1975. Brauerei Battin from Esch-sur-Alzette then joined forces in 2004. The brand names stayed and are still brewed today to the (obviously) secret original recipe.

So, what goes into beer?
Hops, malt, water and yeast – the ingredients have hardly changed to this day. But what’s the secret of a good beer? A tour of Brasserie Nationale reveals all, step by step. Along with your personal guide, the virtual master brewer takes you round all the different stages of production, giving you all the detail. After a little bit of theory and a photo to get you started, you head off to stage one: the ingredients. Where do they come from? What quality standards are there? Are you familiar with the tangy aroma of hops? You should definitely take a sniff. Then comes the major ingredient: water, making up 92% of the beer. The water house has eight 12m-high stainless-steel tanks to hold the precious liquid. A huge underground reservoir of 30,000-year-old water from the iron age is tapped at a depth of 317m. The purest water that has never come into contact with civilisation It is pumped straight up to the massive tanks in the water house. This incredibly pure water recently came onto the market under the name of LODYSS. You can sample this natural wonder from the well in the water house. We move away from pure water at the next stage. Because even water slips down your throat better when it’s mixed with hops and malt. The fermentation process happens in giant stainless-steel kettles. You can’t see it, but you can smell it alright. A delicious aroma of yeast and malt. A little coopering museum shows how the wooden beer barrels were made before stainless-steel tanks came into fashion. Adults get to sample a little distilled beer before heading to the storage cellar. Better than a cold beer in your stomach, maybe.
Good things come to those who wait – the beer is left in peace to mature over six or seven weeks. Making the word “storage cellar” a bit misleading. 16 massive stainless-steel tanks stand in a 24m-high hall – a pretty futuristic-looking place. Beer comes out of the other end of the production process in six-packs. The fully-automated filling plant fills 27,000 bottles every hour. The entire production of 155,000 hectolitres a year is handled by just 27 staff.
Then it’s off for another tasting in a little brewery museum. The star of the show is the 1921 steam engine, giving an impressive demonstration to show it is still in perfect working order.

Tours are available in the all the local languages of Luxembourg, plus Dutch and Chinese. Booking information is on the Brasserie Nationale web site (www.brasserienationale.lu).

Don’t miss it: there’ll be lots happening at Brasserie Nationale before Esch2022 kicks off. The stages of the brewery tour will be even more interactive, there’s going to be a lovely tasting room and shop with local products. And you will even be able to brew your own beer in a day in a microbrewery.

Out and about in the country’s largest nature conservation area