Athens as a symbolic place 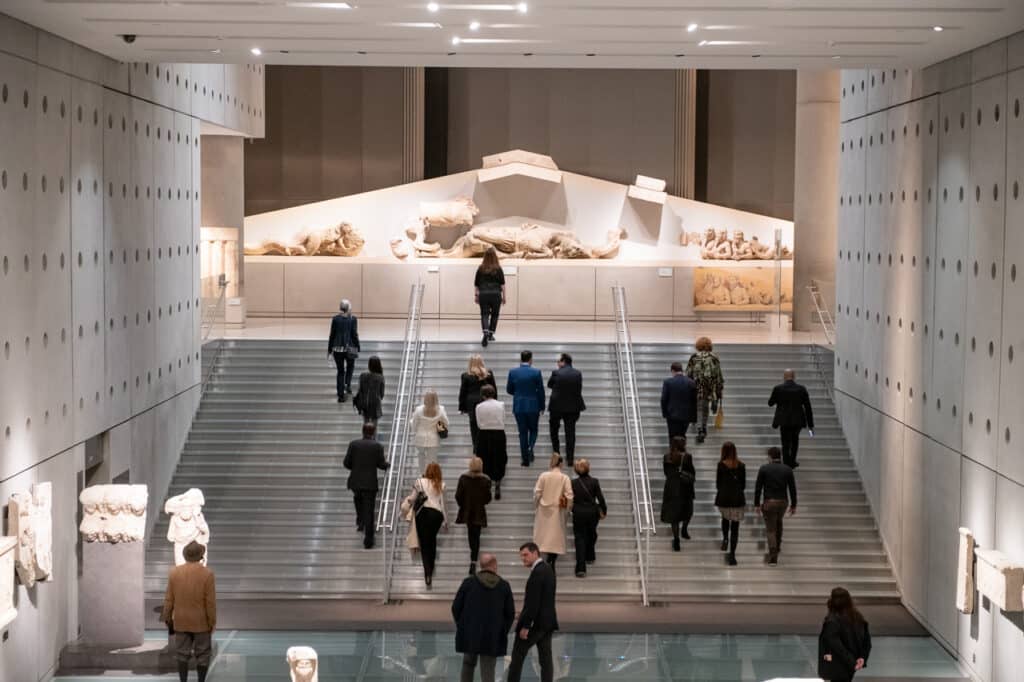 Athens was the first city to be designated as European Capital of Culture (ECoC) in 1985, on the initiative of former Greek Minister of Culture Melina Mercouri, along with her French counterpart Jack Lang. The objective was to gather European citizens closer together by highlighting the wealth and diversity of European cultures and raising awareness of their common history and values. It thus made perfect sense to host the handover ceremony in Athens. The six ECoCs involved for this first time also suggested it should take place in Athens every year from 2023 onwards, an idea which was positively welcomed by the European Commission.

The 90-minutes ceremony was an opportunity for the representatives of the six ECoCs – directors as well as political and other representatives – to speak alongside the Vice-President of the European Commission, Mr. Margaritis Schinas. An art work by Luxembourgish glass sculptor Pascale Seil (“Made by Seil”) symbolized the title handover, symbolically representing European history at the same time. The highlight of the evening was the artistic performance “Tacet” by the Greek-English female dancer Rihannon Morgan from Luxembourg and Greek-French female accordeon player Servane Io Le Moller from Athens, who were part of the cultural program of Esch2022 (“DifferDanceDays”). The evening was completed by the visit to the Acropolis Museum.

A symbol for Europe

The glass sculpture, symbolic representation of Europe, was inspired by a famous story from the Greek mythology: the abduction of King Agenor’s daughter, Phoenician maiden “Europa”, to which the continent owes its name. The myth of Europa, who infatuated Zeus, the king of all Olympian Gods, with her striking beauty and grace, has inspired many writers, historians, painters and European politicians throughout the centuries. Europa also inspired the Luxembourg artist Pascale Seil to create “The Bull”. Based on the Greek mythology, Zeus metamorphosed into a white bull to escape the anger of his wife Hera. He kidnapped Europa and took her to the island of Crete, where he revealed his true identity and impregnated her. Europa gave birth to Minos, who would become king of Crete.

The horns of “The Bull” represent the power; the circle, which carries the horns of the bull, represents volenity and infinity. The sculpture is constructed of 47 layers of coloured glass, each representing one of the European countries. It evokes transparency and lightness, as well as movement through the twisting of the coloured layers. The colours of Europe – blue and yellow (gold) – dominate. The history, the shapes and the colours of all the different layers symbolize Europe as a unified body composed of individual identities and peculiarities.

Participation in a common project – across borders

Similarly, the European Capital of Culture project perfectly embodies this combination of joint forces, yet carrying so many different facets. Hundreds of artists, institutions, volunteers and citizens help shape the special title years and lay the foundation for new things that will last through time. They collaborate with each other and bring people and cultures together. Citizens should actively take part in the project and its activities, and contribute to the development and cultural expression of their city or region. Each European Capital of Culture drives new energy into the city, and naturally boosts its cultural, social and economic development. All past, present and future titleholders should exchange ideas, benefit from each other and support one another by driving projects together.

The cooperation and networking efforts between ECoCs is expressed through projects and initiatives which aim at achieving a long-term impact for the current title year and beyond. In 2022, ECoCs collaborated widely to create a multitude of projects. This newly established event is an additional component that reinforces and symbolizes this cross-boarder cooperation.

Quotes by the Directors of the European Capitals of Cultures

“Our vision for our cross-border project in the South of Luxembourg and the East of France was always closely linked to the European idea. With Esch2022 we brought people together across cultures, generations, sectors, cities and even countries with a special focus on our partner cities. Under the leitmotif Remix Culture, Esch2022 celebrated the history and traditions of the region, but also its innovative power and creativity. With joint forces we helped shape its future in a collective spirit, so it could become a beacon of culture, sustainability, tourism, exchange and encounter through around 160 projects of which many will continue.”

“For the first time, three cities have shared the title and all three have managed to successfully implement the most important European cultural project, based on common European values. It is always an achievement for any city to become European Capital of Culture, but in the time of COVID-19 and the new challenges we all face, this union of three very different but authentic cities, united in their desire for a common European identity, is almost a miracle. This is perhaps one of the greatest legacies that Esch-sur-Alzette, Kaunas and Novi Sad will leave to all future European Capitals of Culture.”

“2022 has shown that we can achieve a lot with a big dream – to cultivate the need for culture, to empower and unite communities, to revive forgotten spaces and to see our beloved city in a completely new way. The title of the European Capital of Culture is a great responsibility and an even greater joy to be given a great European stage. I believe that art is interesting and valuable when it raises questions. I wish Elefsina, Veszprém-Balaton and Timisoara not only to ask questions, but also to find answers through transformative cultural experiences.”

“How many must come together to bring such a project to pass! I think this is the most important hidden truth, the deeply humanistic message of a European Capital of Culture: Art unites! So that we too, here and now, might – positively – celebrate a negation of limits and borders of all kinds. For just one short year, we are being given the opportunity, through culture, to show the way. People together – a United Europe. ΕΛΕVΣΙΣ means Arrival of a notable someone | person , thing or event. So, Welcome to this humble ceremony enacting the family feeling among the ECoCs ! The family of Culture United

“Being awarded the title “European Capital of Culture” is a recognition that the common space of European culture is created by the joint contribution of different countries and cities. It conveys that European culture is shared; it is composed of various regional cultural contributions and is conveyed through the language of the arts. With the handover ceremony, we want to raise awareness and highlight the importance of the title. Holding this prestigious distinction is a huge asset and value for all past and present holders, and we are honoured to share it with Elefsina and Timisoara this year. The significance and the cultural impact of this programme is remarkable throughout Europe, and we would like to demonstrate it with such high-profile events such as this one to make it more broadly known among European Countries.”

“We value 2023 as a year of meaningful connections. For Timișoara, the title of European Capital of Culture has been, from the very beginning, an opportunity to strengthen and broaden the ties between various local communities, to engage in new conversations, and to attract new audiences. In the meantime, we are proud to be part of the ECoC family, offering Romanian cultural operators a fruitful framework for long-term European collaborations and access to shared know-how. Our cultural program is also a solid proof of our commitment and attachment to the relevant issues and realities of today’s Europe.”

Representatives of Ministries, further officials:
(in order along their speeches)

You will find more information online.

More pictures of the handover ceremony: